Anyone know where this comes from? Further south in a site in Western Tasmania the researchers found 54 – 52 million-year-old amber fossils, including a complete mite and a scaly insect called a “felt scale”. 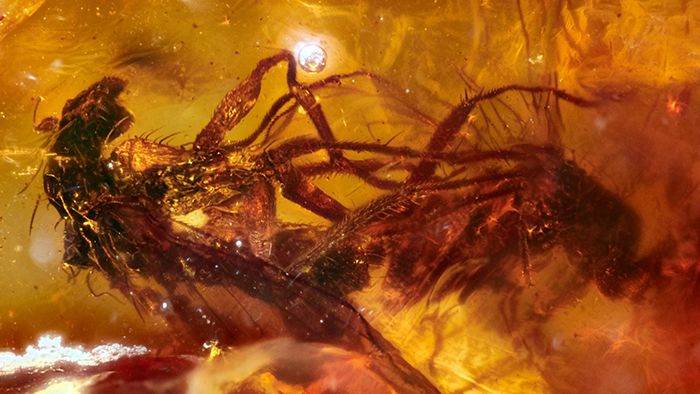 'One of the biggest discoveries in Australian palaeontology' includes mating...

A pair of mating flies suffocated in a glob of tree resin around 40 million years ago and now they're part of a historic Aussie fossil discovery.

Have a look at the link, they list a site for amber.

G’Day Pat
Its a good article but a little confusing.
I interpret that the insects were found in the Qld. sample not the Tasmanian one.
The Rebecca Ck location of amber was never confirmed, but A geologist friend of mine says it definitely was Amber.
The first recorded finding of amber in Australia was in coal from Fingal (Valley rd drilling) that i supervised. I allowed researchers Pedro & Fleur to inspect drill core and Fleur actually found it. The amber was very tiny and too small for insects.
Pedro & Fleur spent several weeks on the West Coast looking for Amber, to no avail, before coming to Fingal. It does not mean that it is not there. it may be difficult to find in West Coast scrub!
Later researchers have returned to Fingal to follow up the original find.
Since then Amber has been found in Qld.

Very good information Ron. I have yet to uncover whether the Rebecca Ck amber is associated with coal, but just looking at the location it may be associated with decomposed peat. ?
One thing I can verify is that solidified gum resin is not Amber, even the NZ amber is actually solidified Kauri gum resin.