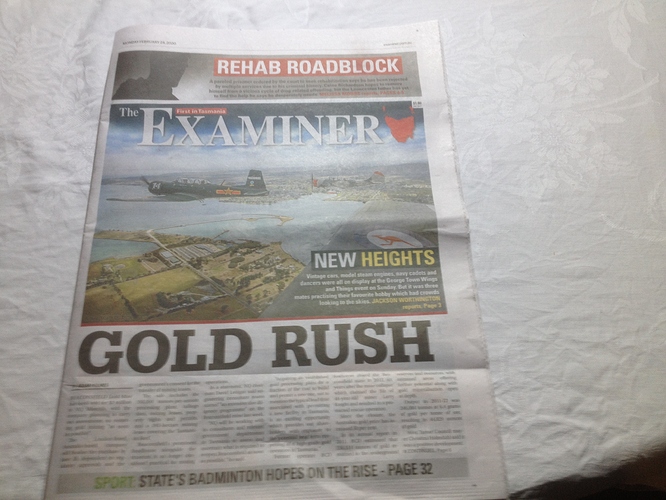 This is the sensational headline in todays Examiner. The ‘gold rush’ is actually NQ Minerals buying Beaconsfield Gold Mine and infrastructure for $2 million. Thats a bargain. NQ also own the Hellyer Mine. NQ want to mine the Tasmania Reef. If it goes ahead they will not use the old headframe which is now a museum piece.

If all the permits etc go through how hard would it be to start? I would say quite hard and expensive. I went down 1 kilometer when the mine was owned by BCD Resources. I’m not an expert but I know the area quite well. They would have to open-up an old shaft like the Golden Gate, Phoenix or Bonanza, or build a new decline.
They would have to access the old decline somewhere I would say, and de-water the mine. I don’t know if the electric pumps were removed or not. I understood they ran 24/7.
There was an air inlet shaft which is in the main street near the fire station but it has been cemented over. It was for sale but nobody bought it. The return air shaft is still operational and now the only way to enter the mine. Its next to a cement plant. Could they use this as a main shaft?

The reef was last mined at 1.2 kilometers below the surface and was still payable. They are expecting between 8.8 and 32.4 grams per tonne. The price of gold is higher than it was when production stopped in 2012.

NQ Minerals are a consortium with 31.3% owned from a Virgin Islands partnership and 6% owned by NZ’s KIWIOZ.

I love mining, the only thing I don’t miss are the ‘seismic events’ that are really earthquakes. They would shake the floor and rattle the windows.

Pity NQX is an English company listed on the UK stock exchange…If it was on the ASX I’d take a punt and purchase some shares. Unfortunately, when buying shares listed overseas the exchange rate reduces a lot of the potential profit - unless there is a run, and they strike err gold.

Yes, I imagine there is a buzz running through Beaconsfield on the back of that news.
I never went underground there unfortunately but to my knowledge the ore body still had reasonable grade but high water influx has always been an issue and ground conditions maybe too.
Karl: the “seismic events” in your opinion are they caused by mine blasts or subsidence or is it natural movements on the reef structure??

Hi Drystone, sorry I didn’t make it to the last AGM.
The ‘reef’ under Beaconsfield is a mineralised fault line of unknown depth. It’s at an angle so it has a footwall and a hangingwall. The richest gold deposit is inside the fault, so removing the ore weakens the fault line and it can then slip at random.
Underground blasting was not triggering these events because they were unpredictable. Whats left after mining is a deep series of stopes or voids in the fault line. I think the enriched zone of the fault is about 600 to 800 metres long.

Interestingly, when the mine filled-up with water it became stable again because you can’t compress a fluid. (Thats how car brakes work

When I went down all of the mining was done remotely (from a safety cell) using video cameras and a joystick to operate the muckers.

Interesting interview on the radio today with one of the company spokesmen . He talked about not using the old mine , and installing a new 3km decline ! Big money job right there ! Good thing they are getting the place cheap . I think all the pumping equipment as well as most other equipment stayed down there . I used to install fire suppression on their mobile equipment and then go underground to service the systems . I serviced the drill rig in the drive that collapsed only 3-4 days before the collapse , there was very impressive gold showing in the roof . They also said that exploratory drilling to the 1500m level had shown good gold reserves but the cost of mining rises steeply at depth . Have been down to 1180m there and can say it’s getting very warm ! It would be a great employer if it gets up and there,s little doubt that the gold is there , but it all hinges on the gold price , and that hinges on the advance of the Coronavirus .

Geez, I hope that the corona virus is gone before they start producing gold. Be a couple of years to dig a decline to that depth but it will make it a lot easier to get the ore out and make processing lower grade ore more viable. I’m not good in confined spaces so I’ll be watching it all happen from the safety of the surface but should be a good source of work for the area.

Hi curt, a 3km decline? I recon they would start on the Hollwell Rd and drive trucks straight in. The corona virus is a worry because it could wreck the rest of the economy. They must be planning long term.

Hi dave, lets hope corona is gone soon because lefroy could start to seem attractive. Well it’s attractive to me as it is

Corona virus is driving gold up , without it and the following worldwide instability the price would drop back making expensive mines like Beaconsfield unattractive . Gold is a safe haven investment in uncertain times .

Yeh mate , you missed it . Hope you missed the joe blakes as well , i ran into a beauty at Lefroy a couple of weeks ago .

I didn’t have to go far for a close encounter, saw a copperhead half way up the laundry screen door luckily on the outside. They like really hot days.

After around 80mms of rain in 24 hours now is the time to get the detector out. Should be wet ground for awhile.