Your rights in and around Moorina - Weld River

We’ve recently had some discussions with other clubs in Tasmania about hostility experienced by fossickers in the Weld River area in Moorina.

Some disturbing incidents include broken glass in camping and parking spots, large items of rubbish in the creek, aggresive confrontations with fossickers and lately booby traps in the camping area inside the designated Fossicking Area.

One particular landowner adjoining the Weld River downstream of the bridge has aggresively confronted fossickers along the river, claiming to own the land right to the center of the river. This is not true, and MRT have spoken to the land owner, though it seems like this has had little effect.

This is to clarify what your rights are in the Moorina area, and the banks of the Weld River. This is best read with the two maps below. 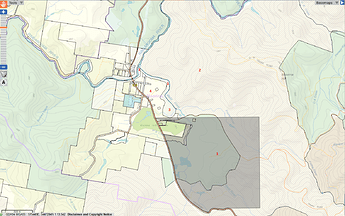 So despite what the local landowner claims, it is your right to prospect on both banks of the Weld River between the Frome Road bridge and the Ringarooma. Given the escalating hostilities, however, I would urge caution. The Police have been involved in at least one of the last few events (involving booby traps in fireplaces). If you camp there, please pay particular attention to your surrounds, and look out for hidden objects among the coals in fire pits, such as flammable liquid cans and/or bullets, shotgun cartridges and so on.

Some new worrying developments around Moorina.

A member of a northern club was fossicking in the Weld River today when he was snuck upon by a local and assaulted.

In addition, more booby traps have turned up in the fireplaces of the Moorina camping area.

Maybe safer at this moment to change location next to Derby where we last camped? Until this issue can be resolved.

Hi @Stozki if you mean for the field trip, it says we’re camping at the Weldborough Hotel campground, not at Moorina.

That’s very worrying are the police involved so not on !